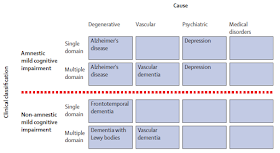 
Alzheimer's Disease (AD) and other dementias are progressive neurodegenerative conditions that unfold over time. Subtle symptoms such as forgetfulness and word finding problems may progress to mild cognitive impairment (MCI), and then escalate to full-blown dementia. Recent efforts to classify prodromal states have included automated analysis of spontaneous speech, which loses complexity as the disease progresses.

In one study, Frazier Fraser et al. (2015) applied machine learning methods to speech transcripts and audio files from the DementiaBank database. The participants were 167 patients with probable AD and 97 controls. The authors considered a total of 370 linguistic features, and found that a subset of 35 was able to classify patients vs. controls with 82% accuracy.1 While an advance over previous studies, this is not yet useful for diagnostic purposes. Another limitation was the relatively short length of the speech samples.2

Using factor analysis, the researchers found that four dimensions of speech3 were most indicative of dementia:

Public figures who give repeated interviews leave a searchable record of spontaneous speech that can be analyzed for changes over time. Presidential press conferences provide another rich source of data for linguistic analysis.

Berisha et al. (2015) examined transcripts from the press conferences given by Ronald Reagan (1981-1989) and George H.W. Bush (1989-1993). We know that President Reagan received a formal diagnosis of Alzheimer's disease in 1994, five years after leaving office. And as far as we know, the elder Bush is still cognitively intact for his age (he's 92 now).

Reagan showed a significant decline in the number of unique words over the course of his presidency, but Bush did not.

Likewise, Reagan showed a significant increase in the use of non-specific nouns and fillers, but Bush did not.

There are several caveats here. Reagan was 69 when he was elected, while Bush was 64. Reagan was president for eight years and Bush for only four years; yet Bush held over twice as many press conferences as Reagan. Nonetheless, the results are consistent with a decline in cognitive function (which is not uncommon when aging from 69 to 77). Can we can classify Reagan as having MCI on the basis of these results? I don't think so. We'd really need comparable data from a population of demographically matched elderly participants.

After his Feb. 16 press conference, the public debate over whether President Trump is mentally unbalanced has intensified. Much of the current and past discussion has centered on the possibility of Narcissistic Personality Disorder (NPD), as speculated in The Atlantic and Vanity Fair and The Guardian. Sure, Trump has many of these qualities (that predate his actual grandiose status as POTUS):
And we can call him narcissistic in the generic sense of the word. But do we need to diagnose him with a quasi-psychiatric disorder, as in this NY Times letter signed by 35 mental health professionals?4


Mr. Trump’s speech and actions demonstrate an inability to tolerate views different from his own, leading to rage reactions. His words and behavior suggest a profound inability to empathize. Individuals with these traits distort reality to suit their psychological state, attacking facts and those who convey them (journalists, scientists).

In a powerful leader, these attacks are likely to increase, as his personal myth of greatness appears to be confirmed. We believe that the grave emotional instability indicated by Mr. Trump’s speech and actions makes him incapable of serving safely as president.


Dr. Allen Frances, chair of the DSM-IV task force, has forcefully argued that Trump does not meet criteria for NPD, because he is not distressed by his behavior:


Mr. Trump causes severe distress rather than experiencing it and has been richly rewarded, rather than punished, for his grandiosity, self-absorption and lack of empathy. It is a stigmatizing insult to the mentally ill (who are mostly well behaved and well meaning) to be lumped with Mr. Trump (who is neither).


This is probably my favorite part so far pic.twitter.com/n61y5I8UrN
— Rachel Riederer (@readerer) February 16, 2017

“You know what uranium is, right?  It's this thing called nuclear weapons and other things.  Like, lots of things are done with uranium, including some bad things.  Nobody talks about that.  I didn't do anything for Russia.  I've done nothing for Russia.”


This is the most egregious example in the one hour, 17 minute train wreck. But there are other signs. He used the construction “very, very” 20 times. The word “thing” (and its variants) was uttered 102 times.

Am I going to diagnose him with anything? Of course not. That's unethical! But I will say that since Mr. Trump has been a public figure for nearly 40 years, we can objectively analyze his spontaneous speech and quantify any changes over time. I must emphasize that there is no magical scale to use for classification or comparison purposes (at least not yet). We don't know what's normal age-related decline and what's pathological.

I suggest that the best corpus of spontaneous speech data is the collection of Trump interviews/conversations with David Letterman. I believe they're unscripted, and there are many many of them on YouTube (I've linked to eight below). Letterman has aged too, so you might as well analyze his speech as well.


...a 10-fold cross-validation procedure in which a unique 10% of the data (i.e., the ‘test set’) are used in each iteration for evaluation, and the remaining 90% (i.e., the ‘training set’) are used to select the most useful features (of the 370 available as described in “Features” above) and construct our models. The reported accuracy is an average across the 10 folds. In a given fold, data from any individual speaker can occur in the test set or the training set, but not both.

4 BTW, they're not supposed to diagnose non-patients, that's unethical.


ADDENDUM (May 23 2017): I updated some of the dead video links. Also, two new posts have appeared today: Trump wasn’t always so linguistically challenged. What could explain the change? (by Sharon Begley at STAT) and Donald Trump: Cognitive decline or TDS? (by Mark Liberman at Language Log).


ADDENDUM #2 (Sept 30 2017): I updated the embedded video, but many of the new YouTube links have been taken down.

You can find them all here here.

The President's News Conference - late Oct 1987
The Neurocritic at 1:29 AM
Share