Neurofeedback Training For Insomnia No Better Than Sham

Neurofeedback training (NFT) is a procedure that tries to shape a participant's pattern of brain activity by providing real-time feedback, often in the form of a video game combined with other sensory stimuli that provide rewards when the “correct” state is achieved. The most common form of NFT uses EEG (brainwave) activity recorded non-invasively from the scalp. The EEG is a complex mixture of neural oscillations of different frequencies. Specific frequency bands are targeted for enhancement or reduction, so the participant can learn to modulate their own brain activity.

An overview of the neurofeedback process is shown below. Signals are recorded from sensors, processed, and classified. The calculated signal is then presented to the subject via feedback in one or more sensory modalities. Participants can learn to modulate their neural function, and complete the loop when the feedback is processed.


In one study, participants were trained to reduce the amplitude of alpha oscillations, with a goal of increasing long-range temporal correlations (Ros et al., 2016). Here's a description of the training procedure:


For online training, the EEG signal was ... band-pass filtered to extract alpha (8–12 Hz) amplitude with an epoch size of 0.5 s. Here, subjects were rewarded upon reduction of their absolute alpha amplitude... Visual feedback was clearly displayed on a monitor via 1) a dynamic bar graph at the center of the screen whose height was proportional to real-time alpha fluctuations and 2) a “Space Race” game, where a spaceship advanced through space when amplitude was below threshold, and became stationary when above threshold. No explicit instructions were given on how to achieve control over the spaceship, and all participants were told to be guided by the visual feedback process.


In a sham condition, the participants were shown feedback recorded from another subject in an earlier session (Ros et al., 2016). Having a sham (or placebo) condition is critical for demonstrating that any gains in performance (or increases in long-range temporal correlations, in this example) are due to self-regulation of specific EEG features learned during training, and not from some generic aspect of the procedure.

In academic articles, neurofeedback is often called closed-loop brain training, perhaps to distinguish it from neurofeedback therapy (also NFT). A recent paper in Nature Reviews Neuroscience discussed experimental applications of NFT1 and theories of the underlying mechanisms. Animal studies have demonstrated that rats and monkeys are capable of modulating the firing rates of small groups of neurons. Models of neurofeedback learning include instrumental (operant) conditioning, motor learning, global workspace theory, and skill learning. Exciting and important research ventures that capitalize on NFT are applications to brain-computer interfaces (BCI) and brain-machine interfaces (BMI), which have allowed paralyzed individuals to type and move prosthetic hands.

Psychiatric applications of NFT have been more problematic. First, you have to correctly identify the frequency band(s) that are abnormal in a clinical population. Then you must have a principled method for selecting the NFT protocol. Finally, you must demonstrate that your specific NFT protocol is superior to sham feedback (in a randomized, controlled trial). Unfortunately, this is rarely done.

Neurofeedback therapy has received critical coverage from the press in recent weeks. The new U.S. Secretary of Education, billionaire Betsy DeVos, has a major financial stake in an NFT company called Neurocore. The New York Times ran two articles critical of both DeVoss's conflict of interest and of the supposed benefits of NFT.

Ms. DeVos and her husband promote Neurocore heavily on the website for Windquest Group, a family office the couple use to manage some of their many investments...

But the claims that Neurocore’s methods can help children improve their performance in school could present a conflict for Ms. DeVos if she is confirmed as education secretary — especially given that the company is moving to expand its national reach.


Betsy DeVos Invests in a Therapy Under Scrutiny

Neurocore has not published its results in peer-reviewed medical literature. Its techniques — including mapping brain waves to diagnose problems and using neurofeedback, a form of biofeedback, to treat them — are not considered standards of care for the majority of the disorders it treats, including autism. Social workers, not doctors, perform assessments, and low-paid technicians with little training apply the methods to patients, including children with complex problems.


And Neurocore is in no way unique. Hundreds of Neurofeedback Centers offer cures for everything from A to T by merely wearing a few electrodes and playing a computer game for 20-30 sessions (and $2,000-3,000).

Pitches are often targeted to concerned parents, but there is little to no evidence that the therapy offered at most of these centers is based on sound scientific research. As mentioned, double-blind, placebo controlled clinical trials are rarely conducted. Thibault and Raz (2017) have been particularly vocal about the lack of rigor in published studies, as well as the inflated claims of successful treatment.2


Advocates of neurofeedback make bold claims concerning brain regulation, treatment of disorders, and mental health. Decades of research and thousands of peer-reviewed publications support neurofeedback using electroencephalography (EEG-nf); yet, few experiments isolate the act of receiving feedback from a specific brain signal as a necessary precursor to obtain the purported benefits. Moreover, while psychosocial parameters including participant motivation and expectation, rather than neurobiological substrates, seem to fuel clinical improvement across a wide range of disorders, for-profit clinics continue to sprout across North America and Europe.

Neurocore’s approach to treating insomnia and sleeping disorders starts by looking at the brain. Using advanced qEEG technology, we measure your brainwaves to help identify the cause of the problem. We also monitor your heart rate and evaluate how in sync it is with your breathing pattern. Your unique neurometrics yield a customized neurofeedback training program that will teach your brain to self-regulate. The result is a brain that’s calibrated for better ongoing recovery, which means better sleep for you.


But the Neurocore “neurometrics” are not obtained from a clinical sleep study (polysomnography) which measures not only brain and heart activity, but also muscle activity, eye movements, and respiration. They haven't identified the “cause of the problem”. It could be sleep apnea or another medical condition.

Brand new evidence indicates that targeted, sensorimotor-rhythm (SMR) NFT for insomnia is no better than sham feedback. Earlier work had suggested that training to increase 12-15 Hz activity over the sensorimotor cortex could improve sleep by enhancing sleep spindles, which are in the same 12-15 Hz frequency range. In the new study, Schabus et al. (2017) took 25 patients with insomnia and administered 12 sessions of real neurofeedback and 12 sessions of sham neurofeedback, also called placebo feedback training (PFT):


Importantly, during the NFT condition, participants had to enhance EEG amplitudes in the SMR range between 12 and 15 Hz, whereas during the PFT sessions participants had to enhance random frequency ranges between 7 and 20 Hz (but not the 12–15 Hz SMR range); importantly within a PFT session only one frequency was trained and rewarded. The reason for choosing this kind of placebo or sham protocol was to involve patients to a similar degree as in NFT, yet with no specific frequency being rewarded systematically. Rewarding another frequency systematically could have resulted in undesired effects on EEG and behaviour that would render the PFT control condition suboptimal.


Outcome variables were objective (EEG) and subjective measures of sleep quality. A forthcoming commentary from Thibault et al. (2017) summarizes the results in a nifty cartoon. 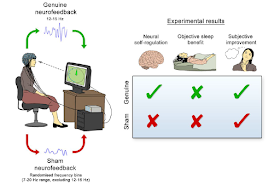 As expected, when participants received genuine neurofeedback, they were able to significantly increase power in the SMR frequency band. This was not the case during sham neurofeedback sessions. Genuine neurofeedback did not alter objective measures of sleep quality (nor did sham). The most important result came in the patient ratings of subjective sleep quality. Genuine SMR neurofeedback improved subjective sleep measures, BUT SO DID SHAM NEUROFEEDBACK. This suggests that any benefit obtained from NFT was due to a placebo effect. Although this was a small study with some complications (e.g., nine of the 25 patients were “misperception” insomniacs with no objective indicators of insomnia), the results were informative about the cause of subjective improvements — they were non-specific in nature and did not rely on training SMR activity.

In their commentary, Thibault et al. (2017) refer to NFT as a superplacebo:


Whether real or sham, neurofeedback demands high engagement and immerses patients in a seemingly cutting-edge technological environment over many recurring sessions. ... In this regard, neurofeedback may represent an especially powerful form of placebo intervention—a kind of superplacebo.


Amusingly, they define superplacebo as “A treatment that is actually a placebo although neither the prescribing practitioner nor the receiving patient is aware of the absence of evidence to recommend it therapeutically.” If everyone thinks neurofeedback treatment works, it is more likely to do so, even though it bears no relation to self-regulation of selective neural activity. Future studies with refined NFT protocols may yet “tune” the brain in a desired direction, but for now... buyer beware.

1 The paper also reviewed neurofeedback studies that use hemodynamic measures. NFT based on fMRI is a newer (and more expensive) development that won't be covered here.

Thibault RT, Raz A. (2017). The psychology of neurofeedback: Clinical intervention even if applied placebo. American Psychologist, in press. PDF
The Neurocritic at 9:26 PM
Share