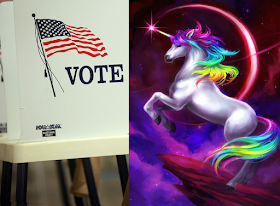 President Trump this week repeated an assertion he made shortly after his election: that millions of ballots cast illegally by undocumented immigrants cost him the popular vote. If true, this would suggest the wholesale corruption of American democracy.

Not to worry: As far as anyone knows, the president’s assertion is akin to saying that millions of unicorns also voted illegally.

- In a Swirl of ‘Untruths’ and ‘Falsehoods,’ Calling a Lie a Lie


Reality has been more than a little trippy lately. Two different versions of current events are being presented to Americans: one based on the quantification of data and the historical record, and the other relying on “alternative facts”, a manufactured reality that supports the President's agenda. My last two posts have dealt with the nature of blatant lying and the difficulty of understanding one's political opponents. I've tried to frame my worries about the future in terms of the neuro/psychological influences on political behavior. After all, this is The Neurocritic and not The Politicritic. But the divide keeps getting worse and worse: the executive order banning Syrian refugees and restricting immigrants from Muslim countries, the baseless claim that millions of “illegals” voted for Clinton,1 the ugly wall and who will pay for it. White House/Breitbart Strategist Steve Bannon told the media to “keep its mouth shut and just listen for a while” (a violation of the First Amendment). Supporters of science are also concerned about possible censorship of the EPA, USDA,2 and National Park Service. 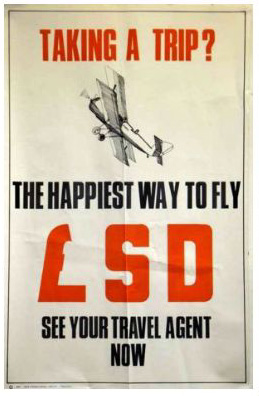 What a Long Strange Trip It's Been

Yesterday was the 11th anniversary of my blog. As I move forward into the 12th year, I wonder how The Neurocritic will stay relevant. Last year I wanted to revisit several posts and ask, “Was I Wrong?” I haven't done that yet. Lately, my standard critiques of cog neuro papers and DARPA projects have seemed unimportant in comparison to the cruelty of recent executive orders (and other threats). These policies are an embarrassment. Shameful. Unamerican. The US is sliding into the ill-fitting suit of an isolationist, authoritarian regime and it's frightening. We must stay engaged and fight via direct action: lobby our representatives, speak out in support of those without a voice, protest against unconstitutional changes — in defense of liberty and justice for all. 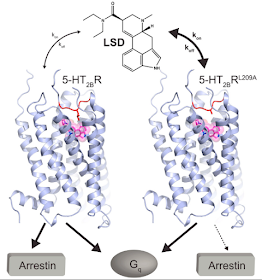 But sometimes we need a break from reality. The alternative reality tenaciously pursued by aficionados of psychedelic drugs (e.g., mind-blowing perceptual distortions, insight into a universal consciousness, entering a portal into another dimension, etc.) is vastly different, of course, than the dystopian sociopolitical construct of  “alternative facts” (i.e., a web of lies).

On that note, two new papers on LSD were published this week. The first study provided insight into why LSD trips last so long (Wacker et al., 2017). LSD binds to the human 5-HT2B receptor (one in a large family of serotonin receptors) in a peculiar way that prolongs its signaling kinetics. The authors created a crystal structure of 5-HT2B bound to LSD and found an “unexpected binding configuration in the orthosteric site.”3

Close-up view of LSD and the orthosteric binding site of the receptor from: (B) the membrane, and (C) the extracellular space.


Wacker et al. (2017) consider this a model system for the 5-HT2A receptor, thought to be the main site of action for LSD's psychedelic properties.

In fact, the second paper linked the “fabric of meaning” to the activation of 5-HT2A receptors (Preller et al., 2017). “Meaning” was defined as the attribution of meaning to musical excerpts that were not previously significant for the participant. This “meaningless” condition was compared to musical excerpts that had been selected as personally significant, and to neutral passages. The Swiss researchers also collected pharmacological fMRI data from the 22 volunteers, 16 of whom had never taken hallucinogens before. This was surprising to me.4 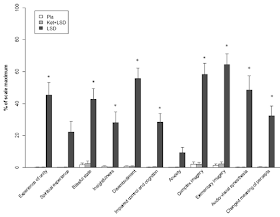 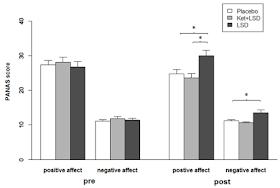 LSD also increased meaningfulness ratings for the meaningless musical passages, an effect that was reversed by ketanerin as well. This overattribution of personal relevance was accompanied by increased activation of medial and lateral frontal regions for the LSD condition, compared to ketanserin + LSD.


...the results provide evidence that this alteration in relevance attribution is related to increased activity of brain areas that are typically involved in self-referential processing and are of clinical importance in psychiatric disorders characterized by altered self-processing.


But it would be an exaggeration to say that all the implicated structures are specific for self-relevant processing, since the SMA, dACC, and vlPFC are important for motor and cognitive processes. Another key issue in fMRI studies of LSD and other psychoactive drugs is motion artifact. Three participants were excluded for excessive head movement (>3 mm) during a scan, but this criterion may be too liberal.

Nonetheless, the complete reversal of LSD's mind-blowing effects by ketanserin was fascinating. Now if we could eliminate more nefarious distortions of reality with a drug, that would really be something.


As always, thank you for reading!

But but... Trump's daughter, son-in-law, and press secretary are registered to vote in two states.

2 That order was rescinded. Others have said this is not unusual during transitions. We shall see...


To obtain structural insights into LSD’s actions at human serotonin receptors, we crystallized an engineered 5-HT2BR construct bound to LSD by extensively modifying our previous approach (Wacker et al., 2013). We eventually obtained crystals and solved the X-ray structure of the 5-HT2BR/LSD complex to a resolution of 2.9 Å.


No substantial side effects were recorded during the study. Four participants reported transient headaches after drug effects had worn off. One participant reported transient sleep disturbances for the first two nights after drug administration. Participants were contacted again three months after the last drug administration. No further side effects were recorded.