Is there an objective test for Aphantasia? 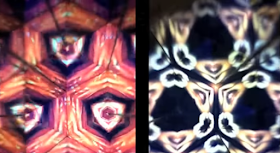 
How well do we know our own inner lives? Self-report measures are a staple of psychiatry, neuroscience, and all branches of psychology (clinical, cognitive, perceptual, personality, social, etc.). Symptom scales, confidence ratings, performance monitoring, metacognitive efficiency (meta-d'/d'), vividness ratings, preference/likeability judgements, and affect ratings are all examples. Even monkeys have an introspective side! 1

In the last post we learned about a condition called aphantasia, the inability to generate visual images. Although the focus has been on visual imagery, many people with aphantasia cannot form “mental images” of any sensory experience. Earworms, those pesky songs that get stuck in your head, are not a nuisance for some individuals with aphantasia (but many others do get them). Touch, smell, and taste are even less studied — mental imagery of these senses is generally more muted, if it occurs at all (even in the fully phantasic).

The Vividness of Visual Imagery Questionnaire (VVIQ, Marks 1973)2 is the instrument used to identify people with poor to non-existent visual imagery (i.e., aphantasia). For each item on the VVIQ, the subject is asked to “try to form a visual image, and consider your experience carefully. For any image that you do experience, rate how vivid it is using the five-point scale described below. If you do not have a visual image, rate vividness as ‘1’. Only use ‘5’ for images that are truly as lively and vivid as real seeing.” By its very nature, it's a subjective measure that relies on introspection.

But how well do we really know the quality of our private visual imagery? Eric Schwitzgebel has argued that it's really quite poor:3


“...it is observed that although people give widely variable reports about their own experiences of visual imagery, differences in report do not systematically correlate with differences on tests of skills that [presumably] require visual imagery, such as mental rotation, visual creativity, and visual memory.”


And it turns out that many of these cognitive skills do not require visual imagery. A recent study found that participants with aphantasia were slower to perform a mental rotation task (relative to controls), but they were more accurate (Pounder et al., 2018). The test asked participants to determine whether a pair of objects is identical, or mirror images of each other. Response times generally increase as a function of the angular difference in the orientations of the two objects. The overall slowing and accuracy advantage in those with aphantasia held across all levels of difficulty, so these participants must be using a different strategy than those without aphantasia.


Another study found that people with aphantasia were surprisingly good at reproducing the details of a complex visual scene from memory (Bainbridge et al., 2019).4

What test does require visual imagery? The phenomenon of binocular rivalry involves the presentation of two different images to each eye using specialized methods or simple 3D glasses. Instead of forming a unified percept, the images presented to the left and right eye seem to alternate. Thus, binocular rivalry involves perceptual switching. The figure below was taken from the informative video of Carmel and colleagues (2010) in JoVE. I highly recommend the video, which I've embedded at the end of this post.

A recent study examined binocular rivalry in aphantasia using the setup shown in Fig 1 (Keogh & Pearson, 2018). The key trick is that participants were cued to imagine one of two images for 6 seconds. Then they performed a vividness rating, followed by a brief presentation of the binocular rivalry display. Finally, the subjects had to report which color they saw.


The study population included 15 self-identified aphantasics recruited via Facebook, direct contact with the investigators, or referral from Professor Adam Zeman, and 209 control participants recruited from the general population. The VVIQ verified poor or non-existent visual imagery in the aphantasia group.

For the binocular rivalry test, the general population showed a priming effect from the imagined stimulus — they were more likely to report that the subsequent test display matched the color of the imagined stimulus (green or red) at a greater than chance level (better than guessing). As a group, the individuals with aphantasia did not show priming that was greater than chance. However, as can be seen in Fig. 2E, results from this test were not completely diagnostic. Some with aphantasia showed better-than-chance priming, while a significant percentage of the controls did not show the binocular rivalry priming effect. 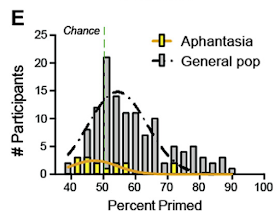 
Furthermore, scores on the VVIQ in the participants with aphantasia did not correlate with their priming scores (although n=15 would make this hard to detect). Earlier work by these investigators suggested that the VVIQ does correlate with overall priming scores in controls, and binocular rivalry priming on an individual trial is related to self-reported vividness on that trial. Correlations for the n=209 controls in the present paper were not reported, however. This would be quite informative, since the earlier study had a much lower number of participants (n=20).

What does this mean? I would say that binocular rivalry priming can be a useful “objective” measure of aphantasia, but it's not necessarily diagnostic at an individual level.

The Shock of the Unknown in Aphantasia: Learning that Visual Imagery Exists

Imagine These Experiments in Aphantasia

1 see Mnemonic introspection in macaques is dependent on superior dorsolateral prefrontal cortex but not orbitofrontal cortex.

2 The VVIQ is not without its detractors...

3 Thanks to Rolf Degan for bringing this paper to my attention.

4 Also see this reddit thread on Sketching from memory.