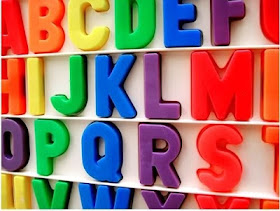 Synesthesia is a rare perceptual phenomenon in which the stimulation of one sensory modality, or exposure to one type of stimulus, leads to a sensory (or cognitive) experience in a different, non-stimulated modality. For instance, some synesthetes have colored hearing while others might taste shapes.

GRAPHEME-COLOR SYNESTHESIA is the condition in which individual printed letters are perceived in a specific, constant color. This occurs involuntarily and in the absence of colored font. It is the most common and widely-studied of all types of synesthesia (Mattingley, 2009). Many studies have suggested that the phenomenon is not due to associative learning, i.e. exposure to colored letters or blocks as a child (Rich et al., 2005). One neurological explanation is that it's due to greater white matter connectivity between the inferior temporal lobe regions that process letters and colors (Rouw & Scholte, 2007). 1

However, a new study has identified 11 synesthetes whose grapheme-color mappings appear to be based on the Fisher Price plastic letter set made between 1972-1990 (Witthoft & Winawer, 2013). 2 Letter-color mapping data were obtained from the participants using either The Synesthesia Battery Web site (synesthete.org) or in-house software. This required that the subjects use a color picker to identify the hue of 26 upper case letters and 10 numerals three times each (presented in random order). They did this in two separate sessions, and then the consistency within and across sessions was evaluated. The participants also completed a speeded Stroop-like task, where they had to identify whether the color font was congruent (A) or incongruent (A) relative to their synesthetic mapping.

Lo and behold, the resultant mappings were "startlingly similar" to the colors used in the Fisher Price toys from their childhoods! And 10 of the 11 participants reported owning the colorful plastic magnetic letters. In the figure below, the subjects are arranged left to right according to the number of matches with the Fisher Price set. S11 showed the fewest matches (n=14), yet the probability of obtaining 14 or more matches in 26 chances was estimated to be less than 1 in 1 billion... 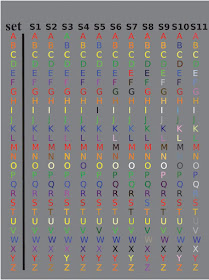 Fig. 2 (modified from Witthoft & Winawer, 2013). Letter-color matching data from the 11 subjects. The diagram shows the color selected for each letter, averaged across three trials for each subject. The left-most column indicates the colors of the Fisher-Price refrigerator magnets used by all but 1 of the subjects as children.


Thus, the results provided clear evidence of a learned contribution to color-grapheme synesthesia, at least in this group of participants. But they don't negate a more purely perceptual version of the phenomenon in other synesthetes. The two synesthesiae can peacefully coexist:


Whereas some researchers have focused on genetic and perceptual aspects of synesthesia, our results indicate that a complete explanation of synesthesia must also incorporate a central role for learning and memory. We argue that these two positions can be reconciled by thinking of synesthesia as the automatic retrieval of highly specific mnemonic associations, in which perceptual contents are brought to mind in a manner akin to mental imagery or the perceptual-reinstatement effects found in memory studies.


Nonetheless, for some color-grapheme synesthetes, it's always a Red Letter A...

1 However, a newer study says it's more complicated than that (Hupé et al., 2012). These authors found that synesthetic letter experience did not activate color area V4, and that grapheme-color synesthetes did not show greater connectivity in the inferior temporal cortex:


At the end, careful reading of the relevant literature casts some doubt on the textbook story that synesthetes activate “color area V4” when viewing achromatic graphemes (but experiencing color) and on structural brain differences reported between synesthetes versus nonsynesthetes.

Rich AN, Bradshaw JL, Mattingley JB. (2005). A systematic, large-scale study of synaesthesia: Implications for the role of early experience in lexical-colour associations. Cognition 98:53-84.